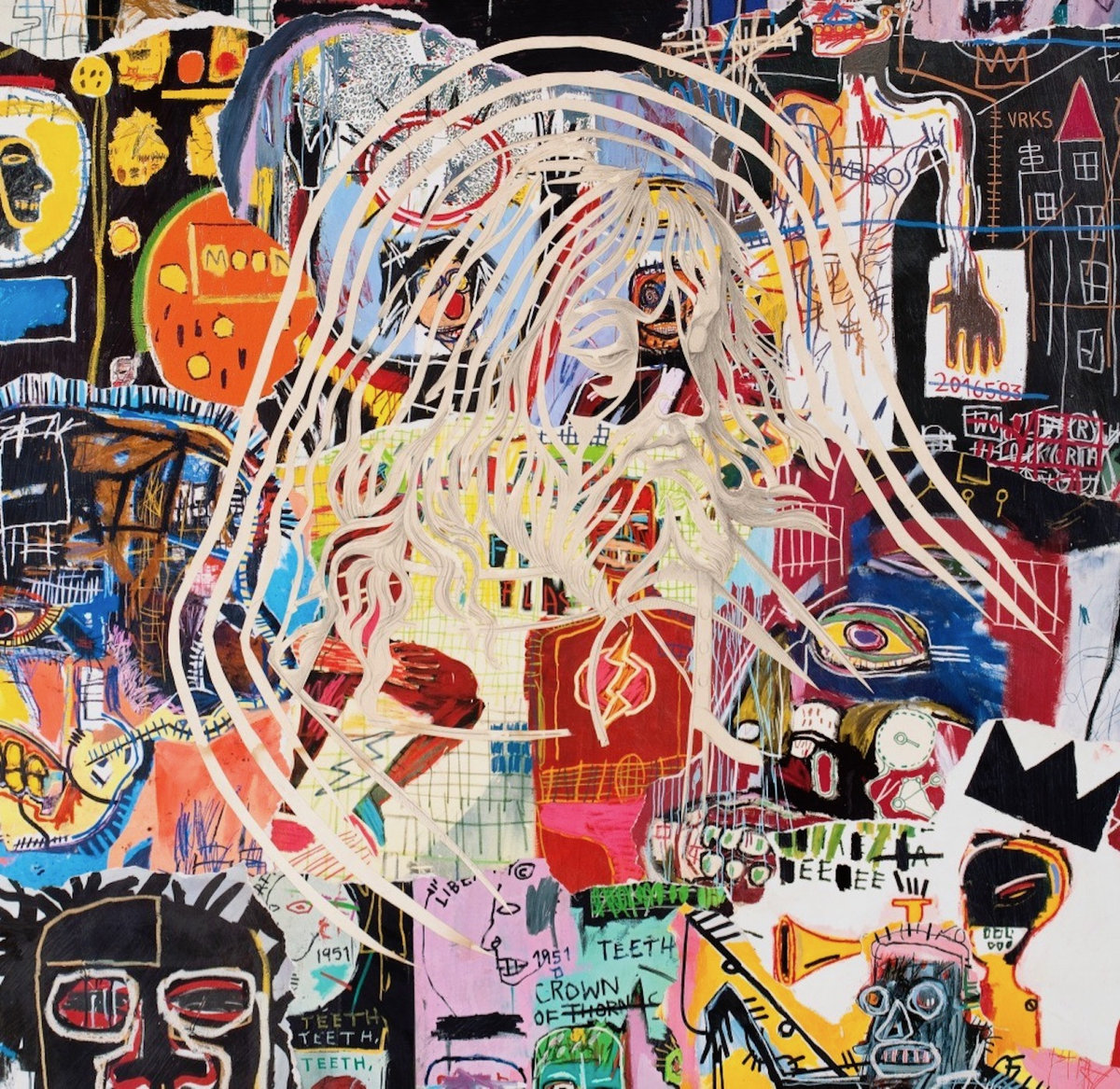 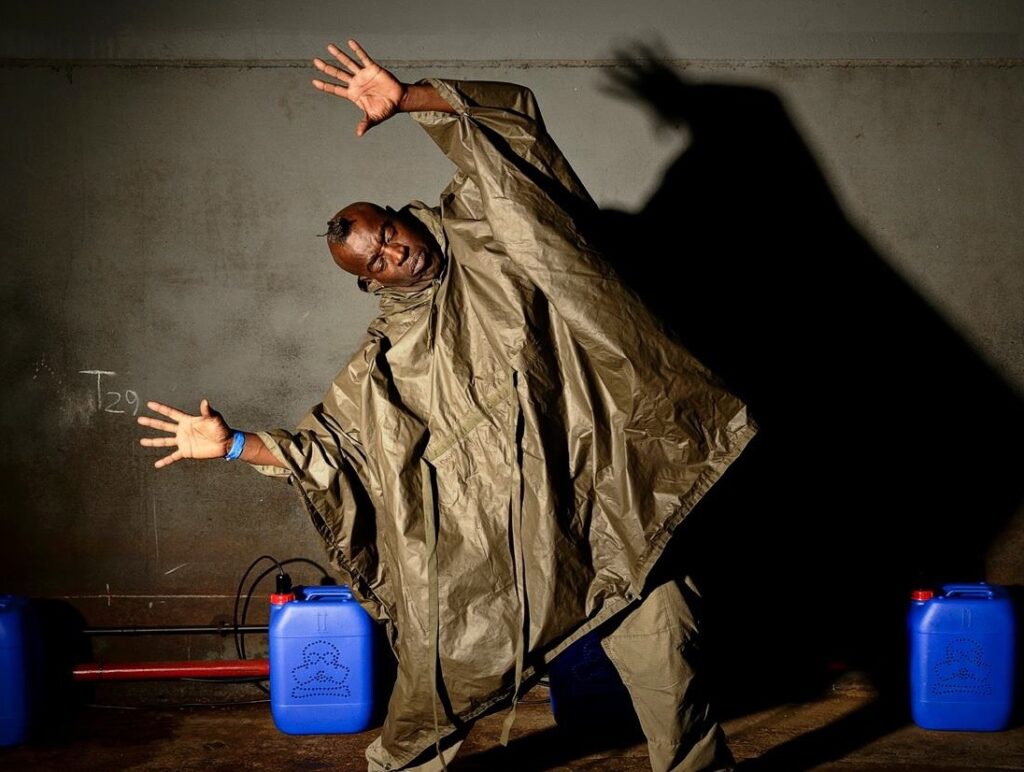 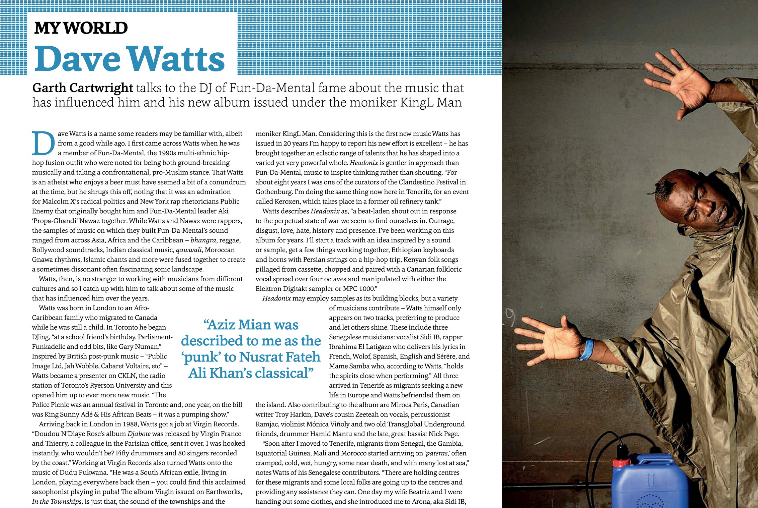 Helmed by Dave Watts, known to many as a member of Fun-da-mental and his genre-bending DJ sets under the name D.WattsRiot, KingL Man is a shout out in response to the perpetual state of war.

Outrage and disgust, love and hate, history and presence.

A thank you letter for being witness to the great and the good.

The channels are fired by a fusion of hip hop, traditional world, dub & space in a b-boy stance, colliding with whispered words and field recordings married with surprised partners.

Dave Watts may previously have kicked a hole in your consciousness via his work with Fun-Da-Mental or his globe-strafing DJ sets as DWattsRiot. Here, he helms an album that upends ideas about global music, bringing in a stunningly wide array of voices and collaborators to create an album simultaneously placeless yet crammed with dissidence and resistance. As such it’s way more compelling than any more self-conscious global jukebox manoeuvres, a true soundtrack for those without a home where they are, or a home to go back to. Not world music, but between worlds music.
Traditional sounds form the blueprint here, whether Egyptian horns, Senegalese rap, Japanese spoken word or field recordings of migrant camps – but thrillingly Watts refuses to be ‘authentic’ about any of it, seeing it all as malleable to his deeper project of reflecting global non-Western anger, love, hate, politics, history and persona. Opener “Can I Sing With You?” sees Senegalese vocalist Sidi IB reflecting on his own torturous migrant journey before the bust-open shards and fragments that start “No Hay Pescado” coalesce into a moving lattice of shifting bass and beats – the multilingual rhymes of rapper Ibrahima El Latigazo are key throughout the album.
Though reminiscent of albums like My Life In The Bush Of Ghosts or My Life In A Hole In The Ground, Watts’s sampladelia is never purely for aesthetic or textural reasons – there’s a gritty, proud, Black political animus behind everything you hear, as well as compassionate verbals about the status of migrants and refugees worldwide, particularly when Watts himself (under his Mike Input pseudonym) drops his unmistakable lines.
Crucially the righteousness of the record never feels worthy, never feels like something you ought to respect. Rather the labyrinth of samples, voices and broken beats is always ravishing and compelling enough to make every fresh corner a revelation. A record for these tangled and torsioned times to rank alongside The Bug’s Fire. Seek it out.

3RRRFM | The Good, The Dub, The Global

“One of my albums of the year.”

“I can’t recommend it highly enough”

If you knew and loved Fun-Da-Mental, the so-called ‘Asian Public Enemy’, the agitpopping global prog-punk collective that cudt a swathe through the UK and the world from the 90s on, the you knew Dave Watts. The group’s anti-racist sentiment and political savvy were embodied by its explosive frontman who has maintained his righteous rage as genre-bending DJ, D.WattsRiot and now, as KingL Man, a Canary Islands-based beats-maker and disrupter. It’s no wonder, them, that debut album Headonix feels like a sucker punch, its ten tracks pulsing with features by artists including Senegalise vocalists Sidi IB and El Latigazo, both of who did time in a Tenerife migrant holding centre, and Mame Samba, whose vocals of the track ‘Guidance & Healing’ offer precisely that.
Traditional music including Egyptian horns and Astatke-style Ethio-jazz works with a band on violin, percussion, drums and bass guitar deployed by the late, legendary Nick ’Count Dubulah’ Page. Canadian writer/poet Troy Harkin rails against corporate greed on ‘Monsanto’; Watts tells it like is is over samples and glitchy electronics on ‘Mike Input at Loud Speakers Corner’; singer Zeeteah lifts the rippling, ambient ‘Assuage No.9’ into the stratosphere. Richly textured, clear in its message and valid in its anger, this is a work with something to say.